[Halloween History] Why Is The Pumpkin A Symbol Of Halloween?

On Halloween, we always meet pumpkins in many different shapes from pumpkin Halloween costumes, pumpkin lanterns to many other pumpkin decorations. Gradually, it becomes the symbol of Halloween and it is almost impossible to replace it with any other vegetable. So, why is the pumpkin a symbol of Halloween? and what is the meaning behind it?

The symbol of Halloween

Like the legend of the Irish, once upon a time, in that land, there was a smart but stingy farmer who was called Stingy Jack by the local people.

One day, Jack invited Satan – the Devil to have a drink with him. However, because of the stingy nature, Jack did not want to pay for his drink. He molested the Devil to turn into a coin to pay the seller. But as soon as the Devil did that, Jack put the coin into his pocket with a silver cross that makes the Devil unable to return to his original form. Eventually, Jack agreed to free the Devil under the condition that the Devil cannot bother Jack for a year, and if Jack dies, he would not claim his soul.

After a year since that day, because of fearing being bothered by the Devil, Jack again tricked the devil into climbing the tree to pick fruits. While the devil was up on the tree, Jack carved the silver cross into the tree’s bark. The Devil was too scared to climb down and Jack agreed with the devil not to tease him for another 10 years before Jack erased the mark. Soon after, Jack died. Jack’s spirit comes knocking on heaven’s door, but God would not allow such an unsavory figure into heaven.

Afterward, Jack planned to go to hell, but upset by the trick Jack, the Devil kept his promise not to catch Jack’s soul so he chased Jack away. The Devil showed sympathy and gave Jack burning coal to make his way in the dark night. Jack put the burning coal into a carved-out turnip and wandered across the Earth. Since then, the Irish began to consider placing candles into potatoes or turnips during Halloween as a good thing to frighten away Stingy Jack and avoid Devil.

That tradition was changed when the people of Ireland emigrated to the United States. These people found that the pumpkin was well suited to gouging out the mischievous face. Moreover, when they lighted up a pumpkin they found it was brighter than lighting inside a turnip, potatoes or squash, so the pumpkin became a symbol of Halloween ever since.

The meaning of pumpkin 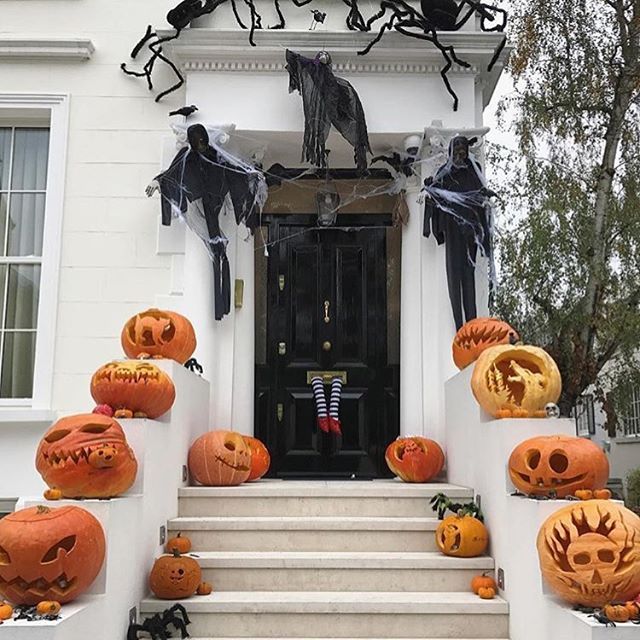 Every year, on the night of October 31 and the early morning of November 1 that is the time of Halloween. It is believed that the soul of the dead will return home to visit and leave a message in a dream. Therefore, during this time, people hung pumpkin lanterns at the door of the house, carved the faces of people in hopes that spirits and the devil had light to find the way and not bother the homeowners.

What countries celebrate Halloween? For some countries celebrate Halloween as Chinese people, pumpkin also means feng shui. In the Chinese conception, the pumpkin is a great symbol of wealth. Therefore, hanging pumpkins with carvings on the doorstep will attract wealth and prosperity. Chinese also often hang a pumpkin box in front of the window with the desire of turning their dreams into practice.

Westerners think that yellow symbolizes success and wealth. Therefore, they often decorate their houses with pumpkins during the Halloween season with the desire to bring luck and happiness.

Nowadays, besides customs born with Jack’s story, Halloween season also comes with meaningful festivals, interesting candies, and many special decorations…. Even, lots of online Halloween stores appear to meet that big demand of people on this occasion.